Last weekend we had independent student travel, and Arden, Julia, Tom and I decided to go to Tena, which is a town in the Oriente near the Amazon Jungle. We arrived safely, after about 8 hours of travel by bus, and found a nice cheap riverfront hostel. We took a little canoe to the Parque Amazonico, which is basically a small island that was made into a sort of reserve for flora and fauna. It was lots of fun and we learned a lot about medicinal plants and some of the native animals in Ecuador. Monkeys, capibaras, porcupines, and tapirs were among some of the aminals we got to see. At night, we walked around town and were at an ice cream shop when an indigenous looking man dressed in khakis and a botton-down came up to us and asked if we are the Americans he was looking for. We weren´t, but the converstion went on for about an hour and consisted of talks about his culture, his life, and the current problems his people are currently having. We had been learning about the conflicts indigenous tribes had with oil companies coming into their territory and moving them out of their land to extract oil, but this was a first hand look into the life of a person who was directly dealing with this. He exprssed his desire to help his people and to save his land, but that despite what the government promised about being on their side, that this was not what was happening in reality. It was sad, but good to know that people care about their land and take the time to fight for it and spread the word about the truth. He talked to me, I talked to others, and hopefully they will pass on the information so we can all know a little bit more about their lives. The next day we went river rafting on the Napo river, did a jungle tour and jumped into a natural pool made by a waterfall, and slept in a lodge in the middle of the jungle. It was a wonderful exhilirating day. The following day we took a bus to the hot springs in Papallacta on the way back to Quito. We took a bus from Quito to Atahualpa and arrived late at night. The last week in this little town I called my home for a month, consisted of painting murals at the school, with messages about taking care of the environment, finishing off the greenhouse for the reforestation of the surrounding mountains, and working on our media projects. The night before we left, we had a going away party with all of the host familes and the members of the local government. It was nice to see how much they appreciated our presence in their town the last four weeks, and we expressed how thankful we were for their love and hospitality. We all showed out media projects, and my group´s was about people´s realtionship with the environment. We created a series of poems with pictures and the audience seemed to like it when it was presented. The goal of our project was to urge people to think about their personal relationship to the environment and how they affect it everyday. Also, to make them question their actions. The local band played a mix of traditional music and modern hip hop and we all danced and celebrated our time together. The next morning it was time to part from the wonderful host family that I lived with for the past four weeks. They all gave me gifts and I wrote them a letter of appreciation. It´s amazing how close you can get to starngers in so little time and the deep bnd that can be formed between people of two completely different worlds and cultures. My host mom shed some tears as we hugged goodbye. I shed some as well. Some tears of sadness, but more of joy that I got to spend time with such wonderful loving people. I will never forget all that I learned from them and the amazing experience I had in the small town of Atahualpa, Ecuador.
Posted by Mijal Grosman at 1:14 PM No comments:

Click path to see the rest. You have to be signed in to Facebook to be able to see the pictures. 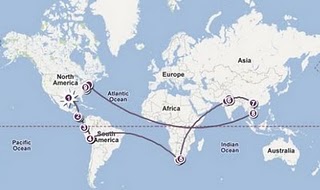